The American Cassinese Congregation is pleased to announce the election of Father Jonathan Licari, O.S.B. as Abbot President at the meeting of the 54th General Chapter, held at Saint Benedict’s Abbey in Atchison, Kansas, June 19-24.  Abbot Jonathan brings a rich menu of experiences of leadership and service to this role of embodying and fostering a functional unity among the nineteen member monasteries.

Originally ordained a priest in the Diocese of Duluth in 1976, Abbot Jonathan became a monk-priest of Saint John’s Abbey in Collegeville, Minnesota, making first profession on July 11, 1982.  He has a doctorate in canon law and has served as a pastor in a number of parishes in Minnesota, as well as prior, subprior, and formation director for the abbey. In addition he was headmaster of Saint John’s Preparatory for six years, from 2013-2019.  Most recently, he has served as administrator for the monks of Mary Mother of the Church Abbey, in Richmond, Virginia, for two and one-half years and will now become the administrator of Saint Mary’s Abbey in Morristown, New Jersey as they prepare for an abbatial election.

The Abbot President presides at the election of an abbot in each of the nineteen member monasteries, organizes the program of visitations of all member members monasteries through a five-year cycle, and is a key canonical bridge to the Congregation for Religious in Rome.  In addition, the Abbot President is a member of the Synod of Presidents (nineteen of them), which meets regularly with the Abbot Primate at Sant’ Anselmo in Rome.  The Abbot President also reaches out to the leadership of other religious orders through participation in the work of the Conference of Major Superiors of Men and Union of Superiors General.

The American Cassinese Congregation is grateful for the election of Abbot President Jonathan and looks forward to his continued presence and leadership.

From June 6-16, 2022, the Benedictine Junior Summer Institute was held at Belmont Abbey. Below, see a note from Fr. Elias Correa-Torres, O.S.B. from Belmont Abbey:

From June 6-16, Belmont Abbey was host of the Benedictine Junior Summer Institute.  Twenty-six junior monks from twelve different monasteries attended.  Over the nine day program, they joined our community for prayer and liturgy, participated in monastic classes, learned about the history of the Catholic Church in North Carolina, and had recreational outings to the Biltmore House and the National Whitewater Center.  Along the way, the junior monks got to know each other and form friendships with monks from other houses, and had many opportunities to talk to each other about their monastic experiences.  And for us at Belmont Abbey, it was a real blessing to be able to host and get to know this group of young monks.

The Benedictine Leadership Institute (BLI), the training and formation program of the Benedictine Educators Network in North America, a regional branch of the International Commission on Benedictine Education (ICBE), held its summer conference for administrators and faculty members in Benedictine secondary schools at St. Anselm College, Manchester, New Hampshire from June 20-24, 2022.

Tihs year’s program goals were to clearly articulate Benedictine hallmarks and their implications to the life of the institution; develop a sense of accountability and responsibility for the Benedictine educational community; provide successes and challenges in engaging, integrating and assessing the Benedictine Catholic mission and identity; and to experience a daily monastic horarium.

The BLI was organized by Mike Nickolai from St. Louis Priory School in Missouri and Jim Duffy from St. Benedict’s Prep in New Jersey who are the Co-Delegates of ICBE North American Region which includes 21 secondary Benedictine high schools.

The final day of the general chapter began with a report on the Papal rescript on allowing Brothers to serve as Major Superiors. The capitulars then continued the ballots for the members of the new Abbot President’s council.  The members of the Congregation council include:

There was also a report on Association of Benedictine Colleges and Universities by Abbot John Klassen, O.S.B. The final business was the dates and place for the 2025 general chapter.

Abbot President Jonathan Licari, O.S.B. presided and preached at the midday Eucharist; a luncheon followed which concluded the 54th general chapter. In the afternoon, the Abbot President had his first meeting with his new council. 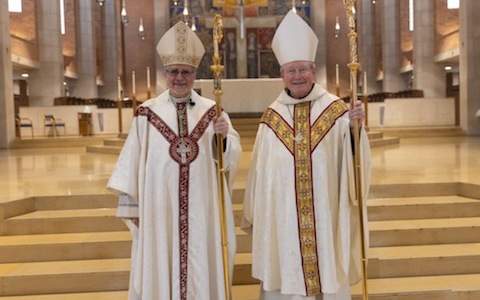 The fourth full day of the general chapter began with the election ballots for president of the congregation.  While the ballots were tallied, Prior Bradley Jenniges, O.S.B. from St. John’s Abbey, Collegeville, Minnesota gave a virtual presentation on the Holy Cross Trust, which funds the operations of the Congregation. Abbot John Klassen, O.S.B. gave an update on Praesidium accreditation.  There were also reports on the Alliance for International Monasticism (A.I.M.) as well as on the American Benedictine Review (A.B.R.).  The results of the election for president were announced; see special announcement.

In the afternoon, abbots and delegates nominated members to the new Abbot President’s council. Each could nominate one abbot with jurisdiction and one non-abbot capitular.  The voting for the council will continue tomorrow.

The abbots and delegates also considered a report on and proposal for Mary Mother of Church Abbey in Richmond, VA to become once again a dependent house on Belmont Abbey in North Carolina, which originally founded them.  The general chapter approved the proposal.

The day’s highlight was the solemn celebration of the Eucharist and conferral of the Rite of Abbatial Blessing upon our new Abbot President Jonathan R. Licari. O.S.B., J.C.D.  The Most Rev. Elias R. Lorenzo, O.S.B., D.D., V.G., Auxiliary Bishop of Newark and former Abbot President himself, presided and preached at the celebration and conferred the Church’s blessing on the new Abbot President.  A festive supper followed by Evening Prayer in the Abbey Church concluded the day. 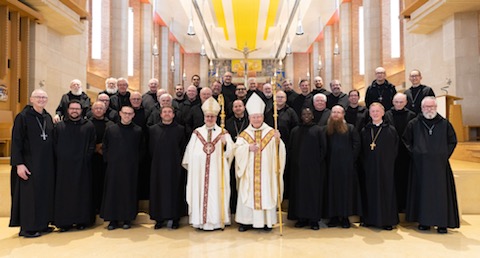 Father Jonathan was ordained a priest on May 15, 1976 and then joined the monastery making his first profession of monastic vows on July 11, 1982.  He holds a master degree in philosophy and a doctorate canon law. He taught at St. John’s School of Theology Seminary and University from 1982-2001.  Father Jonatan served as both sub-prior and prior of the monastery as well as pastor of the abbey parish, St. John the Baptist in Collegeville, Holy Name Parish in Medina and Seven Dolors in Albany, MN.  He has provided canonical services in the Dioceses of Duluth, and St. Cloud and served on our Congregation’s canonical affairs committee.  Father Johnathan also served as headmaster of St. John’s Preparatory School in Collegeville from 2013-2018 and for the past three years as administrator of Mary Mother of the Church in Richmond, VA.  Father Jonathan brings 37-years of administrative experience in monastic and school governance to his new office as Abbot President.

Father Jonathan will receive the abbatial blessing at this afternoon’s celebration of the Eucharist.  Ad multos annos!

The third full day of the general chapter began with a virtual presentation by Abbot Primate Gregory Polan, O.S.B: “Monasticism at this point in time.”  Following the Abbot Primate’s presentation, the abbots and delegates to the general chapter were given an update on the St. Benedict Education Foundation, which funds scholarships for monks attending the college and athenaeum at Sant ’Anselmo, the International Benedictine Pontifical University on the Aventine hill in Rome, Italy.  Many monasteries of the Congregation financially support the foundation so that qualified monks, especially those from developing countries, can attend Sant’Anselmo.  The rest of the morning was spend evaluating the candidates for the office of Abbot President that surfaced from yesterday’s nominations.

In the afternoon, the abbots and delegates took a break from the affairs of the general chapter to visit the Amelia Earhart Birthplace Museum in Atchison.  Built in 1861, this wood-frame, Gothic Revival cottage is perched high on the west bank of the scenic Missouri River.  A festive BBQ supper ended the day in Kansas City.

The second full day of the general chapter began with a presentation by Br. John Mark Falkenhain, O.S.B., a monk and professor from St. Meinrad Archabbey in Indiana: “How do we help community members live celibate chastity?  New challenges through the pandemic.”  Discussion and comments followed among the abbots and delegates.

Then Abbot Lawrence Stasyszen, O.S.B. from St. Gregory’s Abbey and Brother Paul Diveny, O.S.B. from St. Mary’s Abbey presented the surevy results on the characteristics and strengths of the American Cassinese Congregation at this time in our history. Member monasteries were asked to submit in advance such characteristics and strengths in order to discuss how the Congregation may be of assistance to the member monasteries.

The afternoon session began with the initial nomination process for the new Abbot President of Congregation. Each capitular to the general chapter may nominate two individuals to serve as Abbot President who meet the following qualifications: 1) at least thirty years of age; 2) a solemnly professed monk for at least seven years; 3) an ordained priest; 4) a member of the American Cassinese Congregation. While these preliminary nominations were being tallied, the abbots and delegates continued their discussion on the fundamental challenges of individual monasteries and how the Congregation may be of assistance as well as how monasteries might offer mutual assistance to each other.

The day concluded with Evening Prayer in the Abbey Church and supper together.

The first full day of the general chapter began with a presentation by Dr. Emily Cash from St. Luke’s Institute on “The impact of the pandemic on our culture.”  The presentation highlighted the impact of isolation, loneliness with greater awareness of and recommendations for our monastic communities.  Abbot Marion Nguyen, O.S.B. from St. Martin’s Abbey and Father Edwrad Mazich, O.S.B. from St. Vincent Archabbey led a discussion among the abbot and delegates on what have we learned during the pandemic: what changes implemented do we wish to maintain and how to we think about the next “normal” in our monasteries.

Abbot James Albers, O.S.B., the local abbot at St. Benedict’s Abbey in Atchison, presided and preached at the midday Eucharistic celebration.  A luncheon together followed the liturgy.

The abbots and elected delegates from each of the monasteries of the American Cassinese Benedictine Congregation convened today at St. Benedict’s Abbey in Atchison, Kansas for the 54th General Chapter, which opened with Evening Prayer in the Abbey Church and supper together with the monastic community.  Abbot John Klassen, O.S.B. from St. John’s Abbey in Collegeville, Minnesota, currently serving as President of the Congregation since Abbot Elias Lorenzo, O.S.B. was named Bishop by Pope Francis in February 2020, gave the opening address, “Developing the Monastic Witness in the Synodal Church.”